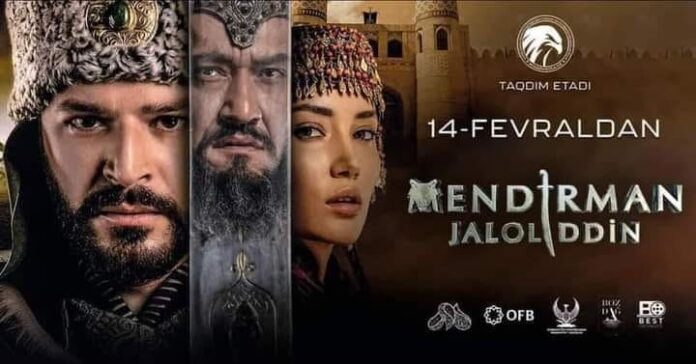 Mendirman Jaloliddin was prepared in Uzbekistan and Turkey which is the new project of Mehmet Bozdag, the producer of the famous television series like Kurulus Osman, Dirilis Ertugrul, and Mehmetcik Kutulamare. In order to make Mendirman Jaloliddin as realistic as possible, a palace from that period was built and numerous 13th-century outfits were prepared. In addition, 1100 workers built the streets of Gurganj, the capital of the Khwarazmian dynasty. The battle scenes of Mendirman Jaloliddin were filmed in Aksaray (Turkey). Historians from different countries took part in the script of Mendirman Jaloliddin.

Mendirman is actually a Kyrgyz epic. The main theme of this epic is the fight against injustice and betrayal. The character of Mendirman in this epic is a brave hero who works for the happiness, prosperity, and unity of his people. It is thought that Mendirman was actually inspired by the life of Jaloliddin.

Jaloliddin’s real name is Mingburnu, but he got this name because of his work. Jaloliddin means a person who defends religion. Jaloliddin’s father, Mohammed II, spent most of his life fighting against the Mongols. Genghis Khan sent a large army under the command of his two sons to Gurganj. Muhammad II thought the fortress defense would stop the Mongols, but that was a mistake. The Mongols soon won the war, and Muhammad retreated west after lost most of his army. Mohammed declared that Jaloliddin would take the throne after him to protect his state. Jaloliddin went to Ghazni and started to build a new army, and this new army gave the Mongols the first major defeat in history. This defeat made Genghis Khan very angry. Genghis Khan took over the army and went after Jaloliddin with almost all his soldiers. Jaloliddin became aware of the approaching danger and began to migrate to India to save the people of Ghazni. Genghis Khan’s majestic army attacked Jaloliddin on the way and massacred most of them, civilians. Jaloliddin managed to reach India with the few remaining soldiers and stayed there for three years.

Jaloliddin gradually began to return to his homeland and gathered survivors of the Mongol massacres. Jaloliddin understood that the Mongols would attack again, but no government helped him. Thereupon, Jaloliddin advanced west and conquered Georgia. Jaloliddin spent almost his entire life protecting his people and all Muslims against the Mongol danger. Jaloliddin tried to advance to the east of Anatolia after Georgia, but Anatolian Seljuks stopped him. Jaloliddin lost the war between the two states, which lasted for almost three days, and went to Diyarbakır with injuries. Jaloliddin died in Diyarbakır. Since Ertugrul Ghazi helped Seljuks in this war, he was given control of Sogut lands.

Emre Kivilcim: The actor, who previously appeared in famous television series such as Elif and Zehra, will portray the character of Mendirman Jaloliddin. Emre also appeared as Sungur in the movie Turks Are Coming: The Sword of Justice.

Cemal Hunal: Cemal is expected to play an important role in Jaloliddin by the audience, whom the audience remembered as Ares from the TV series Dirilis Ertugrul. After studying acting in America, Cemal took part in numerous major projects such as Ulak, Issiz Adam, Tatar Ramazan, Dirilis Ertugrul and Turks are Coming: The Sword of Justice.

Ali Sinan Demir: In the first season of the Kurulus Osman television series, the actor who played Tursun will also appear in Jaloliddin. Before Jaloliddin, Ali appeared in numerous theater plays and short films.

Sezgin Erdemir: Sezgin, known to the audience as “Sungurtekin Bey”, will play the character named Timur Melik in Jaloliddin the television series. Sezgin previously appeared in many famous television series such as Dirilis Ertugrul, Kurulus Osman, Turks are Coming: The Sword of Justice, and Kirli Oyunlar.

Gulenay Kalkan: The experienced actress is expected to revive the character of Turkan Hatun. Gulenay has previously appeared in films such as Yasak Elma, Anne, Sir Gibi, and Gumus.

Yulduz Radjabova: The famous Uzbek actress will play an important role in the Mendirman Jaloliddin television series. Yulduz will appear as the wife of Jaloliddin.