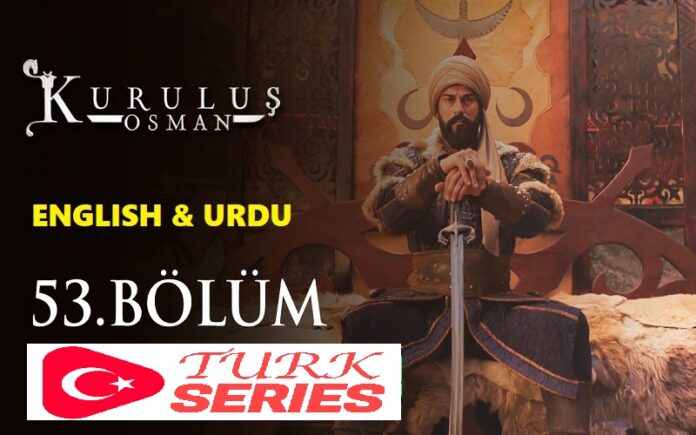 Here we shall give you a complete recap of the things that happened in the previous episode before you watch Episode 53. After doing enough attacks on the Turk soldiers and doing sufficient damage now Togay retrieves his forces. As Gunduz gets this news he plans to attack Togay with a handfull of troops alongside. Malhun tells Osman to retrieve his troops because he has not done what he agreed to. Osman warns Malhun that she is not allowed to sell her horses to his rival and offers her double the gold Nokhola offered. Bamsi comes to know that his beloved Abdurrahman was martyred and now he is furious to take his revenge and find the traitor. Osman is grieved on the view of his soldiers killed by Togay.

Osman assures his Alps that he will take revenge of Abdurrahman. Umur comes to know about the forced purchase of horses through his daughter and gets furious. Now his previous plan with Nikhola is failed. He tells Malhun to ready some soldiers as he goes to talk with Osman. Nikola is happy to start a little war between Osman and Nikhola and as they are busy  He plans to attack Sogut. The Mongolian commander Camuha tells Nikhola about Togay that he is pulling back his troops to Konya. He says that it’s the right time to take out Umur. Nikola says he has a different strategy. He plans that Mangols shall takeover Sogut and then he would do his best to have Osman attack Mangols.

Umur arrives at Osman’s tent and says that he is sorry to hear about Abdurrahman’s death. Osman gets angry at him for doing business with Nikhola. Umur assures him of his support. The messenger sent by Nikola arrives with a message which tells Osman about the whereabouts of Togay and also tells that he was not involved in the attack on his Alps. Osman knows that he is lying and setting a trap for him. But Osman attacks the Mangolian soldiers at the place told by Nikhola. Osman soldiers kill most of the Mongolians but Togay somehow succeeds to escape. Now Camuha is furious about the attack of Osman and he also escapes and announces that he will behead Osman. Osman realizes the situation that Nikhola has lost his trust in Mangols.

Camuha has no clue who told Osman about their location as he goes to Sogut. Camuha asks Petrus if he told Osman about the hidden place. Osman talks to the other Beys that Niklhola can betray Togay and he will use this for his cause. Savci gives the news of Kalanoz’s brother and his army as they are approaching. Osman sees no problem as he plans to takeover inegol before the arrival of Kalanoz. Umur tells Malhun that Osman did very wrong by not calling him for help to attack Mangols. He sends Malhun to talk to Osman. Dundar arrives at the forest to meet Petrus but finds Camuha already there. Camuhs asks Dundar who told Osman about The hidden Mangolian place in the forest.

Dundar tells Petrus that Nikhola sent a message to Osman and then Osman used that message against him with the help of Umur. Osman prepares his army to go to the battle as Malhun arrives. Malhun also wants to join but Osman tells her to go away. While Kalanoz is advancing slowly with his troops Osman joins his soldiers in the forest and explains the plan of attack to them. Umur plans to take over Ingeol while Osman is busy with Kalanoz and Togay. Sheikh Edebali comes to know about Tgaoy’s plan. Bala tells Sheih about the troubles Osman and his soldiers have faced. Osman attacks Kalanoz and  Archers fire their arrows at each other Osman attacks Kalanoz and injures him on his shoulder.

Bamsi and Savci are busy attacking Byzantines. Osman tells that Mongols are going to kill the Byzantine soldiers who ran away from the battle. Umur plans a meet up with the leader of other tribes after he comes to know about Kalanoz’s defeat. Osman calls a meeting of Beys. Malhun is ashamed of her behaviour with Osman. Kalanoz defends his defeat with a lie that he was up against both Mangols and Turks. Osman is committed on the revenge of attack on his troops and death of Abdurrahman. Osman comes to know that Beys he called are with Umur. Sheikh Edebali invites Umur and Osman to his camp. Umur offers a bribe of two chests of Gold to the Beys who come to the meeting and support his tribe. But some Beys point out that Umur did wrong to trade with Nikhola. Osman arrives. Osman says to Umur that he is not supporting the tribes he is only inviting them to war. After listening to Osman Beys refuse to take the gold and leave with Osman. Umur proves that Dundar is a traitor as he shows Osman his ring.