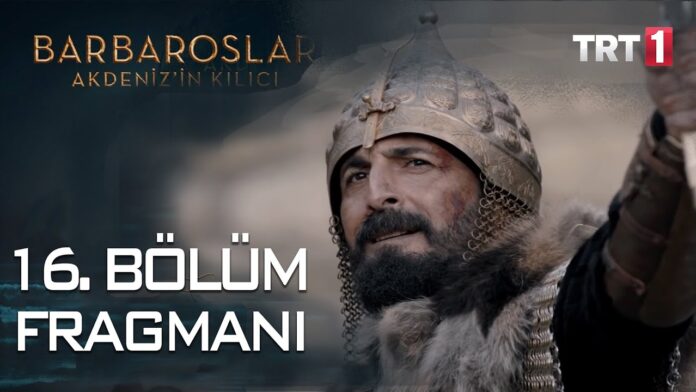 In Barbaroslar Episode 16, Meryem says she did nothing. Pietro says that he will die because of what happened to Leonardo. While Oruj is asking Leonardo some questions, the Rhodes knights’ ship begins to attack them. Gladius starts looking for Khizir on the island to catch him. Oruj’s friends fire the knights’ ship and continue on their way.

Together with Piri, Khizir attacks the knights and then goes to their ship. When Gladius sees the corpses in the forest, he immediately goes to the port and tries to stop Khizir. Gladius can’t catch him, as Khizir punches holes in the boats in the harbor. Sahin says that he will do Unita’s work. Sahbaz objects to his brother, but cannot stop him. Sahbaz tells Sahin that he should never make a mistake in this matter. A short time later, Emir comes to the inn and says that Oruj defeated the Christians.

Oruj says that Ilyas should marry Esther now and wants the wedding preparations to be made as soon as possible. Khizir secretly meets up with Meryem while she is wandering around the island. Meryem tells Khizir what happened in the castle and sets off with him to go to Alexandria. Pietro learns that Meryem has left Kalymnos and orders Piri to be killed. Dervish arrives while Antuan and Leonardo are talking in the cellar. Dervish says it is important to help the prisoners of war and tells them about his religion.

Piri says that years ago while drawing a map of a castle, some Christian soldiers attacked him. Piri continues to tell her story and says Dervish saved her. Dervish then takes Piri to the Sultan’s tent. Sultan looks at the drawings in Piri’s notebook and realizes how talented he is. Sultan does not punish Piri and asks him to continue drawing maps.

The pirates in the inn say that the trade was damaged due to the wars Oruj made. Piri says they did everything for the Muslims in the Mediterranean and beats the pirates. After Piri leaves the inn, Pietro’s men attack him. With the help of Dervish, Piri defeats the attackers. Piri recognizes Dervish and thanks him for his help years ago. That night, the wedding celebrations begin at Oruj’s mansion.

Gladius attacks the ships protecting Lesbos and takes them in a short time. Gladius asks the cannons on the ships to aim at the island. Sahbaz makes a plan to take Leonardo from Oruj and takes action. The next day, a masked man enters the cellar and neutralizes Oruj’s soldiers. Antuan is very happy to see this man and thanks Pietro.

Isabel learns of her brother’s whereabouts and waits for Oruj in the forest to save him. When Piri is about to catch Antuan and Leonardo, Sahbaz’s pirates stop him. Sahbaz tells Leonardo who he is and sets out to take him to the port. Pietro meets with the representatives of the Christian states and tells them that they will soon finish off the Turks in the Mediterranean. A man comes to the castle as Pietro says that Leonardo will come soon. This man is Oruj and he says he will finish Pietro’s plan before it starts.